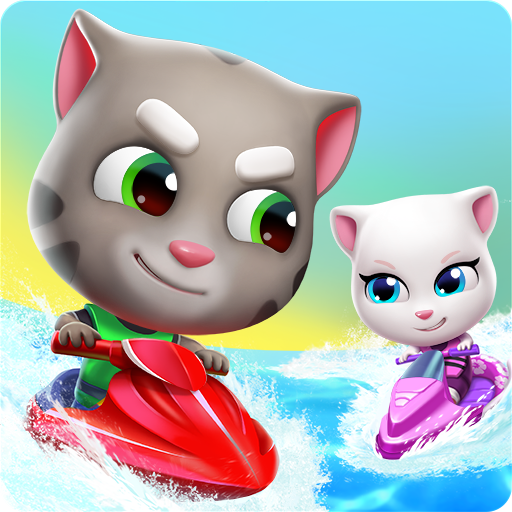 Get ready to race jetskis with Talking Tom and Friends! Explore the tropical islands as you race your rivals. Dodge obstacles and collect all the coins! Go super fast on your very own jetski and build the perfect beach house. What are you waiting for? Let’s go! RACING IS FUN!

– CHOOSE FROM FIVE FREE RIDERS: Talking Tom, Talking Angela, Talking Hank, Talking Ben and Talking Ginger. The whole gang’s here and ready to race!
– COLLECT 25 UNIQUE JETSKIS: Ranging from the fast ‘n’ fierce Tiger Rider to the fabulously pink Sparkle, the unicorn jetski! Choose your very own and be the best rider!
– BOOSTER UPGRADES: Customize your jetski with special parts to compete against opponents who’ll do anything to win.
– RACE IN FIVE DIFFERENT WORLDS: See the spectacular sights by racing in Angela’s Beach Resort, Ben’s Science Lab, Ginger’s Sandcastle, Hank’s Surf Shack, and Tom’s Treasure Island.
– WIN CHESTS: Every victory earns you a chest packed with mystery items. Will you get the prize you want?
– BUILD YOUR OWN BEACH RESORT: Spend your race money on building a unique luxury beach house for each character.
– ANYONE CAN PLAY: The simple control system lets players of all skill levels enjoy the thrill of being a jetski racer.

This game gives you more of the jetski action you love, but with better graphics, upgradable jetskis, and exciting rewards to win with every victory. So download it for FREE now!

JUMP ON YOUR JETSKI AND LET’S RACE!

This app contains:
– Promotion of Outfit7’s products and third-party advertising
– Links that direct users to other apps and Outfit7’s websites
– Personalization of content to entice users to play the app again
– The option to make in-app purchases
– Items are available for different prices in virtual currency, depending on the current level reached by the player
– Alternative options to access all functionalities of the app without making any in-app purchase using real money (level progress, games, in-game functionalities, ads)